Two or Three Things I Thought About Super Deluxe 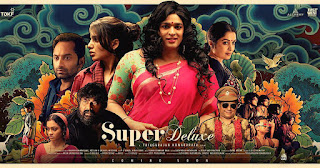 "Super Deluxe" is one of the most intellectually thrilling and exciting films I have seen in quite some time. I saw it more than a couple of weeks back and I am still thinking about certain scenes, situations and their various possible implications and meanings. This doesn't happen very often with me these days, not because the quality of the films have gone down necessarily but mostly because I am too swamped with work and family responsibilities. In other words, I sometimes miss my twenties.

I have been disappointed to see that the film has generated precious little substantive commentary on the internet. Even the ones which praise it do so in bland and generic terms. I see so many film critics complain every week about the quality of the films that they have to review and pass judgments on but when a film of this ambitious and with this intellectual and artistic calibre comes along they just ignore or lay down their intellectual weapons, saying that discussing anything in detail would be revealing spoilers or claiming that it is something to be experienced, not analysed etc etc. I don't expect everyone to praise it but I do expect critics and intellectuals to at least engage with it. On negative reactions, it isn't like there haven't any, on the contrary, I have seen a lot of negative comments, some of which I experienced myself when I tweeted my enthusiasm after watching the film. People have variously found it shallow, nihilistic, pretentious and incoherent.

What I write below is not a review or an answer to those negative comments but just a few ideas, or if you like, "intellectual framework" with which one can engage with this film. At least this is something I found useful to think about it.

Aesthetics of Reenchantment
The concept of disenchantment in sociological terms was first proposed and discussed in detail by the German thinker Max Weber. He explained it in terms of the transformation of the society through the processes of rationalization and devaluation of religious beliefs. Critics and thinkers like Georg Lukacs brought this concept in the domain of aesthetics, specially aesthetic realism which they claimed was both an expression and an instrument of disenchantment. So a novel by Balzac for example showed that social institutions or the beliefs which justified their existence which hitherto was thought to be eternal, God-given and natural was actually contingent and man-made and, at least in Balzac's case, always mediated through money. Philosophers like Lukacs saw this process of disenchantment in positive terms, thinking that once we realize the contingency of our social institutions and see them as organs of a much bigger capitalist system, we would be in a better position to throw them off altogether.

Now this road to utopia proved to be much more elusive than in the theory outlined above. Instead of socialist utopia, disenchantment led to the problem of nihilism. I don't have the space here (and indeed the intellectual wherewithal) to discuss the problem of nihilism and what thinkers like Nietzsche did with it. Instead I want to think about what are the possible responses to the disenchantment and nihilism that art can provide in the modern world. One possible response is to go back to the original problem of the representation of reality itself and look deeply and make us think if we were overhasty in junking religious and spiritual beliefs, or at least the worldview which was implied in those beliefs. Unlike in the 19th century realist novel, where the rational causal structure of the narrative was used as an instrument of disenchantment, what if we use the narrative to show how seemingly arbitrary, random, irrational and mysterious those cause and effects could be? This is exactly what "Super Deluxe" does, and in the process it asks us to hold our final judgment on the possible implications and meanings of the events described in the story. The connection with the religious belief and nihilism is very explicitly explored in at least one strand of the story.


Philosophy of Sex
I can already see some smirking faces as they read the subtitle and I think that's a real problem. Our society is weird in this way because we find sex ubiquitous but still we spend very little time to think about it as an intellectual problem. I can see some more laughs here. I get it. Sex is something you do, not something you think about as an abstract problem. Even when you think about it, you think about the problems related to the practice of it - e.g. the problem of consent, how vocal or explicit it should be, can it be revoked etc etc. What I am stressing about here is the metaphysical aspects of sex. What does sex itself mean? One aspect that gives sex its mysterious aura is the confusion about its various purposes, specially the proximate purpose - which is the satisfaction of one's sexual desire and deriving and giving sensual pleasures and the ultimate purpose, which is procreation. The confusion between the two is basically nature's conspiracy to trick us to contribute to propagation of our species. Why did it happen like this? Was it because if proximate and ultimate causes were aligned people may not feel motivated enough to contribute to that propagation? What does it mean to see so much of life's suffering face to face and still contribute to its propagation through sex? The film very explicitly makes a statement about it at the climax but these ideas are woven together in many different strands of the story.

Abstraction and Irony
I have not talked about any stylistic aspect of the film so far so let's come down to it. I thought most of the negative comments I found online had similar roots. I saw many people who felt that the film didn't take itself and the subject it explores seriously enough, turning even the serious and seemingly dark scenes into something comic and in the process making it easier for the audience to brush it away. Even when it has something serious to say, it puts it in a "jokey" context and in the process dilutes the message. It gets even worse, because the inner world of the film is populated to the brim with references to other films and artifacts of pop culture. And all this just to appear clever in the mind of viewers who get all the pop culture references! It reinforces one's belief that it is to be seen as *only* a film and that it is a shallow exercise in the demonstration of film style, something an immature student of film making would do.

This is a deeply mistaken aesthetic response in my opinion. Of course this is *only* a film, of course the characters here are abstractions. Shilpa, Vaembu and Arputham don't exist in the real world. Their existence is confined to the world inside the film. They are created expressly by the writer and the director to convey certain ideas, feelings and emotions. They are not real people like you or me. Thinking of art in this way doesn't devalue its aesthetic merit. In fact I think we must always keep the "artifice" and the "artificiality" of the art in forefront while engaging with it. Forget realistic films, I see that people forget this basic dictum even watching comic book fantasies. They think of those characters as real people, just like you or me, and make emotional or moral judgments accordingly. This is deeply wrong and it is based on a fundamental misreading of art itself which is always and by its very definition artificial and full of abstractions.

Putting jokey things in a serious contexts and its opposite, putting serious things in a jokey context, again doesn't necessarily have to mean pretentiousness or shallowness. Instead it leads to an ironic effect which makes the intellectual engagement with the ideas explored much more productive because then you have many layers of meanings that you have to unpack.The first layer may be a joke and you may laugh but then you peel another layer you find an interesting idea that makes you think and then still you peel another layer you find a tragedy or something dark or mysterious and you are moved or disturbed to rethink something you thought you had a good handle on. To me this is really what a true aestheic experience is.

Also, to be honest, response to some of the pop culture references will also depend on one's own background. The way I reacted to this song when it came up at the end will not be the same for most of the others who saw it. I saw it as an expression of one of the most authentic and sublime joie de vivre imaginable, others may just find it a joke. And I think on that note, this is probably a nice way to end this blog post too, just like the film itself does.