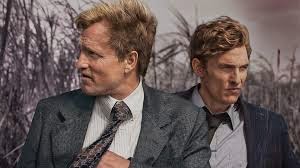 Judging by the comments and articles on the Internet, it looks like I am not alone in being disappointed by the ending of the first season of Twin Detective.

- It is beautifully shot and I am not just talking of the famous tracking shot at the end of 4th episode. Whether it is the aerial shots of the swampy landscapes of Louisiana or despair inducing scenes of rural desolation or the shots of the two leads having a conversation in the car, it is all breathtaking. I could actually watch it with sound on mute. It is that good. Adam Arkapaw, the cinematographer, also shot Top of the Lake (other great find for me from last year) which should propel him among the top ranks in the list of contemporary cinematographers, that is if he is not there already. I should also mention the director - Cary Joji Fukunanga for the great attention he paid on the visual elements of the drama, which is actually one of the things that keeps me away from TV dramas (specially sitcoms) because if it is not visually appealing or distinctive it gets boring after a while.

- Brilliant lead performances by both Woody Harrelson and Matthew McConaughney. The show lacked interesting secondary characters (unlike, say, Breaking Bad) but it more than makes up for the attention it pays on the leads.

- inconsistent writing. In the first few episodes I was actually enthralled by Rust Cohle's monologues about human consciousness and other horrors of human existence. I couldn't believe I was hearing those words on a tv show. I am not familiar with the genre of Weird or American horror fiction but I could easily trace the influence of Nietzsche, Dostoevsky, Cioran and other purveyors of hard and pessimistic existentialism. But everything comes to a nought towards the end of the show with a truly conventional denouement, which will not be out of place in a standard serial killer hollywood movie. If that was not enough we also get a monologue about how "the light is winning against the dark", that too from the mouth of Rust Cohle. May be one should feel grateful that the writers didn't make him beg for mercy to God or turn him into a born again christian. In hindsight all that talk about consciousness, evil and existence became what it was - the kind of talk guys have in their hostel rooms when they are half-drunk.

- comparison with Twin Peaks. At many times while watching the show my thoughts kept going back to Twin Peaks, constantly comparing these two detectives with agent Cooper and sheriff Truman. I was thinking that "the Yellow King" would be someone like "Bob" from Twin Peaks and "Carcosa" like the mysterious woods that surround the town of Twin Peaks both stand-in for some kind of immanent evil in the world at large. Twin Peaks showed that you can catch the murderer but the spirit of evil will always be free, always looking for victims, feeding on the "garmonbozia" of pain and suffering. In this sense it profoundly subverted the genre of detective fiction which is built on the premise that the detective with his power of ratiocination restores the order to the world which was disturbed by some evil act. Thinking like this True Detective felt even more conventional than it really is.

Overall I still feel it is worth watching. It is certainly far more intelligent and interesting than the movies Hollywood continues to make.